Does it make sense to compare “the Spanish flu of 1918” with the Covid-19 epidemic? 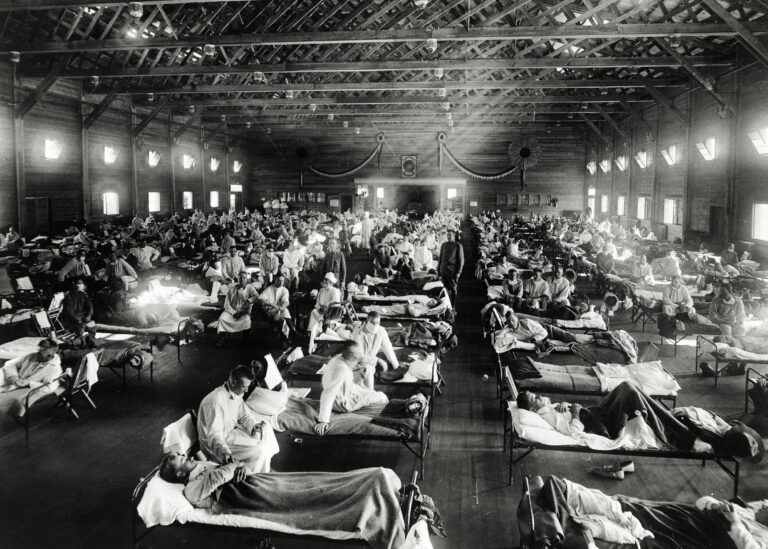 Many articles, statements and videos have compared the current pandemic with the 1918 pandemic, also known as the “Spanish Flu”. They even state that we can learn important lessons about confinements, masks or even “second waves”.

But does this comparison make sense?

What was different at that time?

There are many differences between 1918 and the present:

The spread of the flu was facilitated by the mobilization of large masses of the population due to the war (1st World War). Thousands of soldiers, many of them wounded or sick, disseminated the disease.

Specificity of the evolution of the Pandemic

Although it is common for different waves to occur in epidemics, the existence of three major waves in the “Spanish flu” over a period of eight to nine months was exceptional. Besides the particular historical context, one of the hypotheses that has been advanced is the mutation of the virus.

Differences between the viruses

SARS-CoV-2 is a coronavirus, while the H1N1 of the Spanish flu is an influenza virus. Although they have many similarities, namely in the form of transmission and type of genetic material (RNA), they also have some differences. Perhaps the most relevant is the fact that the influenza viruses undergo much more mutations and thus make it difficult to create a strong cross immunity – with other viruses of the same family. This does not happen with coronaviruses.

The main agent behind the deaths

Contrary to the general perception, most deaths will not have been caused by the virus. Although it is common for flu deaths to be caused by secondary infections, this was the last pandemic in which there were no antibiotics to fight them. This seems to have been decisive.

According to analyses of lung tissue collected at the time, and the review of information collected from 8,398 autopsies, there is strong evidence that the vast majority of deaths resulted from bacterial infections and not the virus itself.

Extent of the tragedy

Another big difference is the impact caused by both pandemics. It is estimated that the Spanish flu killed about 50 million people. Considering the population at the time, this means that about 3% of people died.

At this moment, the official number of deaths by Covid-19 represents about 0.015% of the population.

In addition, the Spanish flu affected a lot of young and healthy people, namely under five years old and people between twenty and forty.

The number of Covid-19 deaths in young people is rare. The majority of deaths occur among the population over 80 years old, or among people with one or more previous diseases.

Some even suggest that the available data support that the epidemic is strongly accentuated by a late seasonal effect in the northern hemisphere, and by a previous mild flu season.

The “Asian flu” victimized about 0.038% of the world population at the time, the Hong Kong flu of 1968 (H3N2 virus) approximately 0.028%, and the “swine flu” which, ended up having an estimated lethality lower than the seasonal flu, may have victimized only 0.005% of the population. Currently, the official records of “death by Covid-19” correspond to approximately 0.015% of the world population.

About these pandemics we have much more reliable data and the circumstances are much more similar. Surely we have more to learn from them than from the “Spanish flu”.